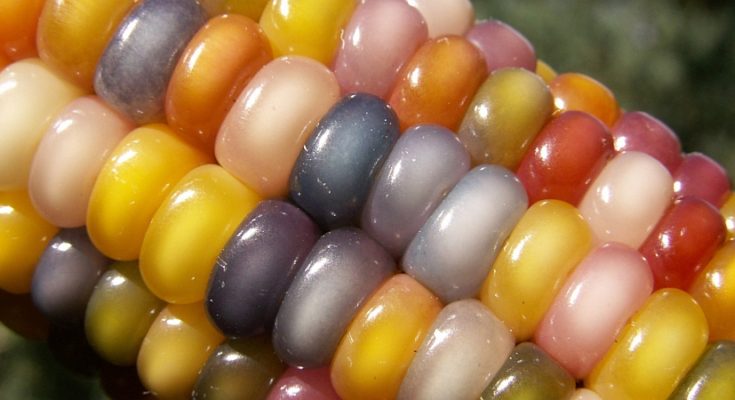 This is glass gem corn, one of the most dazzling varieties of maize you can find. And guess how it came about? It’s an actual story:

There was a man named Carl Barnes who wanted to find out more about his roots in the Native American side of his family, which was Cherokee. So when he was already getting older, he started growing older corn varieties as part of his idea of connecting to his heritage. As he was growing these old types of corn, he could isolate types that Cherokees and other tribes used to grow in and around what is now Oklahoma. That was just one of the things he ended up doing, though.

While he was planting different types of old maize, he starting picking out the really colorful ones, and then replanting the seeds. Eventually, he’d put together so many of these colorful corns that the result was as you see in the pictures, a rainbow of corn. It’s what is now called “rainbow seed corn.”

But then another farmer, Greg Schoen, took interest in the rainbow corn, and thanks to him we have access to it in so many modern varieties, because he started mixing it with other types of corn that people more commonly eat, and the colors became even more bright and varied. And he ended up developing a lot of different types of dazzling corn, based on colors such as deep purple, circus colors, and rainbow.  He also has spoken on the most important strains that originally started the corn lineage: According to Schoen, Barnes once told him that the rainbow came from a cross between Pawnee miniature popcorns and Osage red flour corn and Greyhorse Osage. You can now buy Schoen’s different types of corn in seed packets.

For those farmers out there, whether with a cornfield or just a few corn plants out in the back yard, here’s how these (or a typical one of them) size up: The harvest for glass gem corn is around 110 to 120 days after planting. At that time, the colors will be brightest and most transparent, which is what a lot of people are looking for when they grow glass gem corn, and at that time the husks outside of the corns will look dry and brown. The full-grown plant can be up to 9 feet, but a 6 footer is considered full grown as well. More growth can result from more watering, as with all corns.