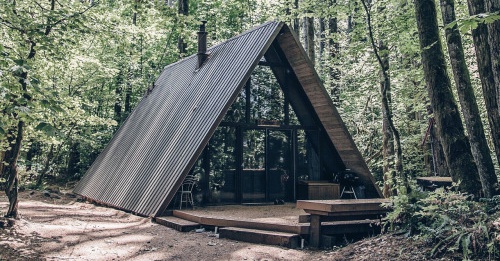 When considering a prefab or modular home design, and if you’re setting it in the woods or a woodsy setting, you might well be considering whether to build a regular square prefab house or an A-frame construction.

This is an old question for those thinking of what to build. The A-frame has some benefits, besides its style. One of those is its oft-noted ease to build. A person on his own or with a friend can set up an A-frame. Basically, you build a platform and then just make triangles and pull them up and string them together until you have the length you want, and then finish off the roof. Carpenters will of course say there’s more to it than that, and there is, but when you boil it down to the basics, that’s how you set up the most simple of A-frame cabins.

Another benefit is, if you’re setting up your cabin or home (whether it’s a modular house / prefab home or not) somewhere where there’s a lot of snow, the sharp peak of the A-frame roof is going to help you there, whereas the flatter roof can suffer under accumulated snow. A-frames dont need gutters, in general.

Now the downsides: space — there’s less of it for a given footprint size. Also, those sloping walls make positioning appliances and things awkward. Often, with small A-frames, a loft is built in the upper half of the triangle on one or both sides of the building, and that’s where the bedroom is / bedrooms are.

Also, you’re heating a tall peaked roof, and you usually aren’t up there in the peak, so heat can be an issue.

Maybe this is why a lot of people start out by thinking A-frames would be right for them, and only some of them end up going with the A-frame. Because a small regular construction is also fairly easy for a person or small group to put up, and many areas don’t get a ton of snow, a regular cabin might be better. And because there are a lot of prefabrication / modular construction companies that build custom homes with A-frames, it might be something to look into if you like the idea of living in one / cabin-ing in one.

This modern A-frame was originally shared at the Spacetime Continuum by some bloggers who have become “less exciting” lately (their words not mine).

To learn about how to build your own prefabricated A-frame home, a good starting point I found is Mother Earth News (click here). Visit the Spacetime Continuum blog (click here).