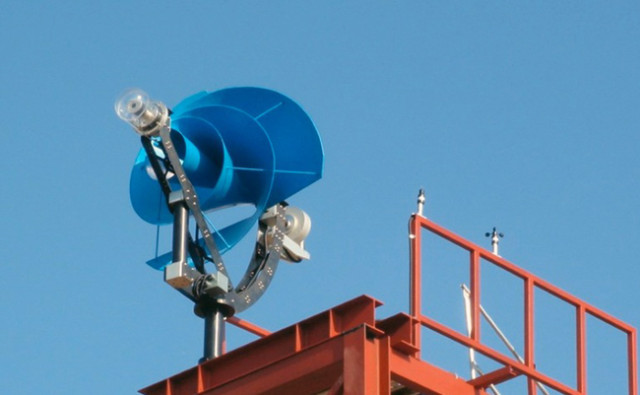 Nowadays, people are always looking for a way to live off the grid and to become eco-friendly. This type of energy has come a long way and now you can get a quiet rooftop wind turbine made with all the modern technologies it takes to run a wind turbine. Though wind turbines can have their issues, it is still a great way to save money and energy in the future. This wind turbine can generate 1,500 kWh of energy a year.

Not only are these wind turbines “green” and eco-friendly but they are also designed in a modern way and very attractive. They come in blue, red, or lavender/purple. These are the wind turbines of the future. You no longer have to have a cumbersome piece of equipment attached to your home, but now you can get your energy from efficient and attractive turbines.

Since sharing this, we’ve heard from our community, and we’re going to share some of the most important info again here with you all again. Assessments of this turbine vary by person, mostly it seems because some people have way higher energy costs than others (which might have something to do with house size, but also whether its built with new energy-saving house tech).

According to one of our members, David, “The article claims that they can provide half of a homes energy needs, but they only produce 1500kWH per year. That means a 125kWH per month produced by theses generators. With the average American home using 901kWH per month, this means that theses generators will only produce 14% of the average American homes electrical power. Well short of the stated 50%.

… “So far in the new house we are well below average. Propane heater, hot water, cook stove, and dryer. Every light is LED. Our electric bill runs about 60.00 a month in a 4000 square foot house. Not bad.”

Even if other people do get lower costs, I want to point out that what David says is important because it shows what many people pay for electricity right now, and in those cases, these turbines aren’t going to go as far as is reported.

However, Shane seemed to think it was a bit better relative to his experience: “Apparently, I’m below average. I’ve only exceeded 901kWH twice in the past 12 months.”

Given this, and that house heating tech and costs are in flux right now, I’m personally holding off on whether these turbines are worth it. Basically, I’m going to base my opinion on what all you guys out there say about it, as is more and more the case now that we have a bigger community.

Check out the gallery of photos below (all images on our site are expandable, even the featured image at the top).

Find more from The Archimedes and other interior designers we’ve indexed in our Home Designers and Builders Directory. You can search the company’s name and look builders near your area. And to see more interior design, click here.